U.S. Acting Secretary of Commerce Rebecca Blank today presented Geotech Environmental Equipment (Geotech) with the President’s “E” Award for Exports at a ceremony in Washington, D.C. The “E” Awards are the highest recognition any U.S. entity may receive for making a significant contribution to the expansion of U.S. exports.

“Exporting continues to be the one of the building blocks of our sales growth, and we are honored to receive the “E” Award,” said Jeffrey Popiel, Geotech’s President and CEO. “Export sales got us through the downturn in 2008. During the past four years, export sales have grown 40 percent, enabling us to add jobs and bringing much needed equipment that helps to improve the environment into areas which previously could not access these resources.”

“I am delighted to be recognizing this year’s Presidential "E" Award winners for their outstanding contributions to U.S. exports and congratulate Geotech on its outstanding export achievement,” said Acting Secretary Blank. “It is businesses like Geotech that are strengthening the economies of local communities, creating jobs, and contributing to the worldwide demand for ‘Made in the USA’ goods and services.”

Geotech, with 98 employees worldwide, is a leader in the design, manufacture and distribution of ground water sampling, monitoring and remediation equipment since 1978. State-of-the-art manufacturing, machining, thermo-plastic extrusion, contract manufacturing and injection plastic molding capability have allowed Geotech to innovate cost-effective solutions to tough environmental problems for its extensive government, consulting and private industry customers. Geotech currently has distribution in over 100 countries including Australia, Chile, Mexico, the UK, the Netherlands, and France. In addition to seven domestic offices, they have satellite offices in Spain and China.

U.S. exports hit an all-time record of $2.2 trillion in 2012, and supported nearly 10 million American jobs. President Obama’s National Export Initiative, which aims to double U.S. exports by the end of 2014 and support an additional 2 million jobs in the United States, is opening new avenues for U.S. exporters through enhanced export assistance and a strengthened trade agenda that is targeting emerging markets and industry sectors across the globe.

President Kennedy revived the World War II “E” symbol of excellence to honor and provide recognition to America's exporters. The “E” Award Program was established by Executive Order 10978 on December 5, 1961. A total of 57 U.S. companies were presented with the President’s “E” Award this year.

U.S. companies are nominated for the “E” Award for Exports through the Department of Commerce’s U.S. and Foreign Commercial Service office network, located within the Department’s International Trade Administration, which has offices in 108 U.S. cities and more than 70 countries to help U.S. exporters. Four years of successive export growth and an applicant’s demonstration of an innovative international marketing plan that led to the increase in exports is a significant factor in making the award. 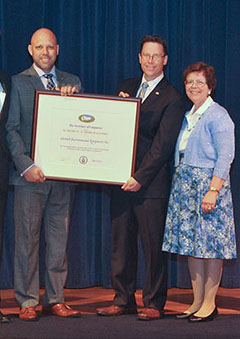